Bustin' Down the Door 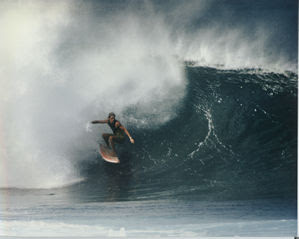 Edward Norton narrates in the Bustin' Down the Door the riveting true story of a group of six young surfers from Australia and South Africa who changed the face of surf in the 1970s with a revolutionary approach and a refreshingly rebellious attitude.

Authentic footage from the era and interviews capture Wayne "Rabbit" Bartholomew, Peter Townend, Mark Richards, Ian Cairns and cousins Shaun and Michael Tomson in action both then … and now.

What The Critics Said

With verve, style and a fine sense of the human side of surf culture, Jeremy Gosch makes a terrific splash with his debut doc, Bustin' Down the Door.


The darker side of the story -- how the advent of pro surfing was taken as an act of cultural colonialism by some of the locals -- adds gravity to this otherwise lightweight, if amiable summer diversion.

Jeremy Gosch's documentary about the origins of professional surfing shines a light on four wave riders – three Australians and a South African – who helped transform a counter-culture life style into a billion-dollar industry.
on agosto 07, 2008